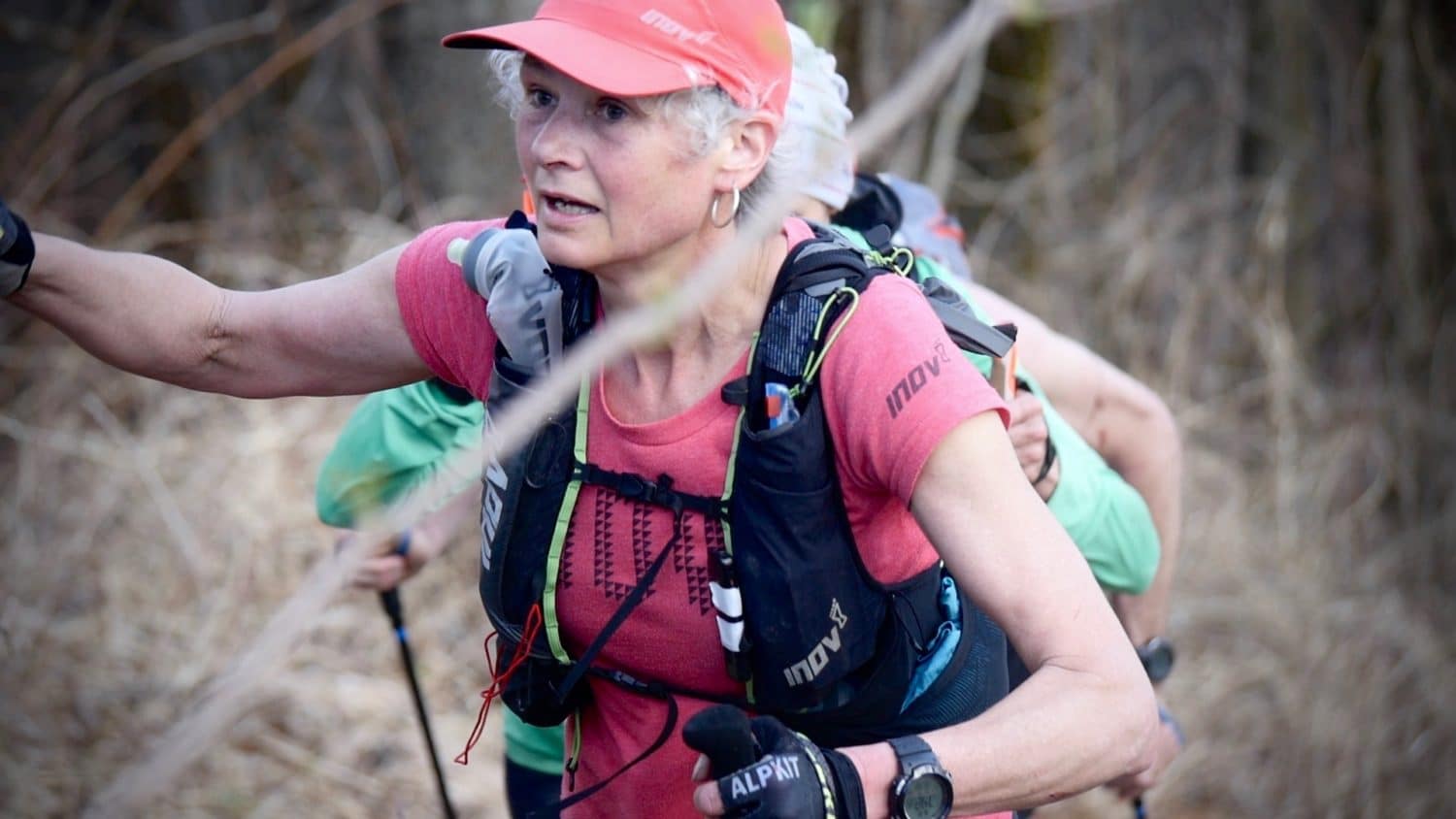 The conch had been blown, the cigarette had been lit. Around 40 runners started the race but the Barkley Marathons were the winners yet again, with no finishers for another year.

The Barkley is a tough and eccentric race that can start any time between midnight and noon on race day. Out of more than 1,000 starts, the 100-mile race has only been completed within the official 60-hour cut-off 18 times by 15 runners.

Endurance runner Nicky Spinks, took part in this year’s event and has spoken of the extreme challenges faced by runners in a race which no-one finished for a second successive year.

The tough 51-year-old inov-8 ambassador and breast cancer survivor was the last-woman-standing alongside fellow participant Stephanie Case in the 100-mile mountain event, widely-regarded as the world’s toughest ultramarathon.

Nicky and Stephanie completed the first 20-mile lap together, before dropping out partway through lap two amid plummeting temperatures and appalling weather conditions.

Only 15 runners – all men – have finished the full five laps of the notorious Barkley Marathons inside the 60-hour time limit since its inception in 1986. This year saw five male runners complete three laps, but none achieved four, let alone five.

The race, made famous by a 2014 Netflix documentary, saw 40 selected runners self-navigate their way around an unmarked course, tearing pages from hidden books as they went, and returning them to the enigmatic event organiser, Laz.

UK-based Nicky, the record-holder for epic 100+ mile mountain challenges like the Double Bob Graham (England) and Double Ramsay Round (Scotland), said: “The Barkley Marathons was extremely tough, in many ways. The first lap was run in really hot conditions, too hot for my liking, and then the second lap was the opposite, unbelievably cold with lots of rain.

“I ran with Stephanie, who is a Barkley veteran, and she was brilliant in helping me learn about the unique elements of the race. Lap one took us about 11-and-a-half hours, which was longer than I had hoped, but the temperatures, the difficult terrain and the time spent trying to find the well-hidden books all played a part.

Asked if she’d like to return and give the race another shot, Nicky, who wore inov-8’s MUDCLAW G 260 shoes with the world’s toughest graphene-grip, added: “I do think that to finish Barkley Marathons, you need to go back a second or third time to do so. I talked to Stephanie about this as we hiked back to camp in the cold and I said I was unsure about returning. She said words to the effect of ‘see you next year!’”

What makes you want to take on these extreme races and challenges?

I like to challenge and test myself by trying new races or undertaking different challenges every year. I like figuring out how I can get better as I get older, and by using other ways than just physically training harder.

How do you keep going in the harshest of conditions? How do you stop yourself from giving up when it gets really tough?

So long as it’s not unsafe to continue, I have never wanted to give up because it was tough or hard. I find a way or making it do-able and carry on. I am very stubborn and hate to leave anything unfinished.

What goes through your head when you are running these long distances? Is the mental battle as tough as the physical one?

I’m generally thinking about what to eat next… and that takes up a surprisingly long time! Then, I think about where I’m going and what peak is coming up next. Sometimes if I see a brilliant view, I take it in before running on. I don’t see it as either a mental or physical battle, as such. The challenge is what it is and once you accept that you find a way of achieving it and making it enjoyable at the same time.

Do you still have bad running days? How do you get over a run when your confidence has been knocked?

I have times, especially before a big race, when I question if I have done enough, but this has happened so often now and I’ve always done okay in the race that I am pretty much able to ignore these thoughts. When I failed to finish Ultra Tour Monte Rosa (170km mountain race in The Alps) it took me a while to come to terms with it, even though I knew I had a chest infection. I re-entered it straight away, determined to put things right. I returned in 2018 and finished first woman. Read more here on the inov-8 blog: https://www.inov-8.com/blog/inspiring-female-runners/

Jasmin Paris is forging the way for women to win more races outright. Watching as she won the 268- mile Spine Race outright earlier this year was fantastic. Read more about Jasmin’s win here on the inov-8 blog: https://www.inov-8.com/blog/q-and-a-spine-race-winner-jasmin-paris/  I am also inspired by any women taking on any challenge that is tough for them.

What made you want to take on The Barkley Marathons? Was it tougher than you expected?

It sounded like a great event with steep, rough ascents and descents – the type of terrain that would suit me. And I was right. I didn’t find the course too hard. It was as I expected and trained for. I had better grip under my feet (thanks to the graphene MUDCLAW G 260 shoes) than others and lap one went well. The difficulties started on lap 2 when the conditions deteriorated severely. It became unsafe for me and the other participants I was with to carry on. We needed full-on winter kit but didn’t have it in our packs. I don’t think I’ve ever felt that cold.

First-timers must bring a licence plate from their home as part of their entry.

How do you prepare yourself physically and mentally for these kinds of challenges?

In training I continue doing what I always do – speed work, long runs, long races and weekends away in either Wales, Scotland or the Lake District. I never shun a mountain. If I can go up it instead of around it, I will. Mentally I like to research the race that I’m doing to find out as much about the terrain, logistics, organisation and timings such as I can. This helps me prepare my kit and nutrition.

Have you always run?  How did you get into running these epic, long distance challenges?

I ran as a child just to get my horses in, but only started running on the fells and trails in 2001. I quickly discovered that I preferred longer distances and did the Bob Graham Round (a 42-peak challenge in the Lake District to be completed in under 24 hours) in 2005. From there it seemed a natural progression to do the Paddy Buckley Round and Ramsay Round – the equivalent of the Bob Graham Round but in Wales and Scotland respectively. Then I got faster and started setting some records, including those for the Double Bob Graham Round and Double Ramsay Round. I always wanted to try 100-mile races and have now done quite a few of them.

What advice would you give to other women wanting to attempt long distance running events?

Women tend to be more cautious than men and dissuade themselves from entering things they are scared of. I would advise women to move up distances slowly, so go from a 6-mile race to a 10-mile race, then a 15-mile race etc. Once at marathon distance, I would find an off-road marathon rather than a road marathon, as the pressure is less and the pace is slower. There is also the views you get when running off-road and they tend to be very friendly events. The Long Distance Walkers Association is a great place to start. Look them up online.

What does running do for you personally?

It does everything. Sometimes I need to relax and chill-out when work on the farm is busy. Sometimes I want to train hard because I have a big race coming up. Sometimes I want to explore a new area and see the views from the top of the mountain. I love spending a whole day on the mountains with my dogs and good friends. The weather doesn’t have to be good, but it helps! I can always make a good thing out of a run, whatever the weather or my initial mood.