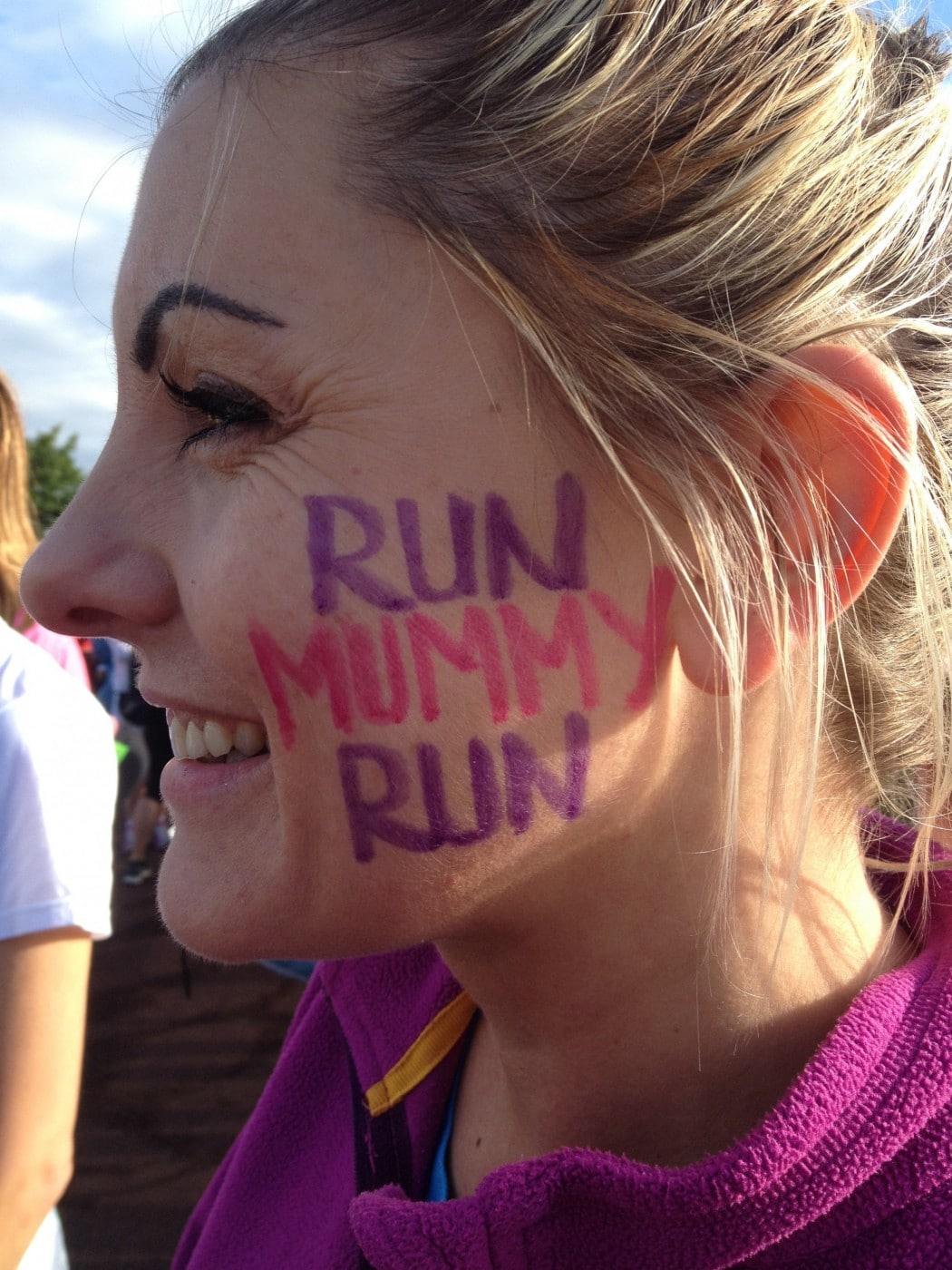 The Morrison’s Great North Run is Britain’s biggest running event.  It is iconic, with thousands running it and millions watching it on television each year. Sunday 13th September 2015 was the date of the 35th Great North Run, a challenging half marathon that starts in the centre of Newcastle and ends on the coast at South Shields.  57,000 runners were registered to take part and 150,000 applied through the ballot.  Last year’s event saw the millionth
runner complete the Great North Run since its first event in 1981.

2015 was my second year running the Great North Run.  Watching it on television has always given me goose bumps.  Supporting on South Shields sea front made me cry.  Seeing the effort and struggle of runners in that last mile is a perfect demonstration of the human spirit.  Yet neither of these compares to actually running this race.  It’s a race like no other.

“The Great North Run has always been my friendly nemesis, my smiling assassin. A 13.1 mile mountain range punctuated with “Howays”, ice pops and the smell of Ralgex. I’ve feared it and its endless home straight (seriously, can a mile be THAT long???) every September. But not this year. This year I rejoiced the John Reid Road. I hugged the Heworth roundabout and I blessed the Tyne Bridge. After six years of cancer treatment I’ve become a different runner, a grateful, lucky, bullet dodging runner. I am fortunate to be here and my feet take to the streets with purpose and gratitude. I didn’t travel solo, no one does the Great North Run alone. I took Caroline (lost on 1st July) every single step. And of course Marc at my side; my coach, my boy, the best running buddy ever. Fact. They were as much part of the journey as they are part of me. Through pain, heat, joy, exceptionally unsuitable underwear, the alleged mugging of a small child (long ice lolly related story) and a terrifying fracas with a wheelchair, I completed the 2015 Great North Run in 01:59:03. And now, I’m a warrior.” Nicky Lopez

“This year was 29 years since I first completed the 13.1 mile run from Newcastle to South Shields. I was only 8 years old. I think these days it would no longer be referred to as character building! My only aim this year was to beat that time (2:52). My dad, my inspiration, the man who ran it with me that first time and has run all but one of the 34 Great North Runs was also running. As always he beat me….one day it will change! The “oggi oggi oggi’s”, the Tyne Bridge, the kindness of the locals, the jelly babies, cheering and ice pops, and the thought of the distance some refugees have been forced to walk  got me round. I declined the crackers & digestives but accepted the beer (I was near the end!). I am already planning the 2016 GNR.  It will be another run with my dad and my foster brother to celebrate our 30th GNR anniversary and to raise lots of money for MS research (after the illness which destroyed his mum.) I may try the beer again, will avoid the crackers and definitely have another celebratory post-run paddle. Maybe 2016 will be the year I beat dad!” Madeleine Vernon

In 2014 my mum had a massive stroke which left her with permanent disabilities. After reading that they can be hereditary I decided that 2015 would be the year that I would try to stop this happening to me. In all honesty I’d always used my 2 kids as an excuse to not exercise but I came up with a plan to fit running in! In January I couldn’t run for 5 minutes but I was surprised at how quickly I improved. By April I had managed to run a solid 10km and had lost almost 2 stone! I was terrified the week running up to the Great North Run but I can safely say it was one of the most rewarding experiences of my life.  Along the route I got quite choked up a few times. Running by the Stroke cheer point got me thinking about how much my mum’s stroke had changed my life for the better. At mile 8 I hit a wall but inspired by all the amazing people around me I pushed on. I ran all 13.1miles without stopping. Crossing that finish in 2hr 30mins was such an amazing moment, one that I didn’t think I would ever be able to achieve”.  Louise Love

“I applied fairly late for the Great North Run, thinking I probably wouldn’t get in. To my amazement I got a charity place. My parents both passed away from cancer when I was child, so it was a no brainer that I would raise money for Cancer Research.  My journey began 12 months ago after seeing how much weight our child minder had lost through running. I started with the C25K program, eventually combining it with regular 5k parkruns. I managed a 10 mile run in training with my friend Hayley who was a great help. I was told that if I could run 10 miles then the atmosphere on the day would carry me the rest of the way. The 13th September arrived too soon but it turned out to be a very special day. I took inspiration from the Run Mummy Run community, my family, and all those who suffer from cancer. The crowds along the course were wonderful, handing out sweets, drinks and ice pops along with morale boosting chants.  I completed my Great North Run in 2 hours 51 minutes. I ran across the Tyne Bridge [my course highlight] and I managed John Reid Road [toughest part] where I was met by my family. My little girl Robyn and my partner Richard are without doubt my greatest supporters. I stopped briefly for a kiss, cuddle and plenty of tears before heading off for the final mile. Everyone told me there was something special about the Great North Run and how right they were. It’s an amazing race and I felt my mam and dad were with me every step of the way.”  Donna Wainwright (aka Dizzy Dora)

“I watched the Great North Run on TV in 2014, never imagining that I would be doing it the following year. Watching it and hearing about friends who had done it inspired me to take up running. I felt unfit and flabby but I downloaded the C25K app.  I thought I probably wouldn’t last the first week. But it was easier than I thought it would be and actually enjoyable.  Fast forward a few months and I signed up for the Great North Run. Training was hard but it was great seeing myself improve week on week. Suddenly, I was standing on the start line feeling nervous and like I might need yet another wee. The atmosphere was awesome, perfect strangers cheering me on, everyone looking out for each other. I’m ecstatic that I ran the whole way. At some points I felt great and other times I wanted to stop but I didn’t. Crossing that finish line was brilliant. My little boy was so proud of me for winning a medal for the family! I enjoyed it so much, I’m going back next year to see if I can run it a bit faster.”  Victoria Parker

“I was over the moon to get my place in the Great North Run. I have watched every previous GNR being a local lass and I couldn’t wait. Being unfit I started to train using the C25k app. It was going well until I fell one night while jogging. I managed to break and dislocate my right wrist and fracture my cheek bone. The doctor said the break was so bad that I needed surgery to piece together all my bones and in the end I had five months off work. I was unable to train as I’d lost all confidence in my feet and was in so much pain. I asked my hubby if he would still be proud of me if I walked all the way? He said “yes of course and don’t give up”. So that’s how I decided to walk the Great North Run. I also wanted to show my two children that you should never give up on what you want to achieve, even if it’s not the way you first planned. The big day arrived and I loved every bit. Even those hills and the heat. Mind you being over taken on the coast road by a man on crutches was not my highest point! Bring on next year”  Joanne Lavocah